The Wilds of Rhovanion kicks off the eighth cycle of The Lord of the Rings: The Card Game with Journey Up the Anduin, an homage to the second Core Set quest, Journey Along the Anduin. It’s a trip up memory lane for veterans of the game, many of whom enjoy the new quest’s fresh take on old foes.

But does the quest still hold water if you’re new to the game and have a small card pool? Or does it feel like swimming upstream until you’ve built up your collection a bit more?

Let’s give it a try and find out!

What we’re up against

As always, I’m going to do my best to avoid story spoilers. If you’re the sort of person who also wants to avoid spoiling the quest mechanics, you can skip over the collapsed sections of this post.

It’s worth mentioning, however, that the storyline of Wilds of Rhovanion picks up where The Sands of Harad / The Haradrim cycle left off. They’re clearly two separate story arcs once you get deeper into the narrative, but if you want to know what motivates your Heroes to do what they’re doing, the answer is basically “all the stuff that happened in the previous cycle”.

It’s probably not too big of a deal to play them out of order, but if you’re the sort of person who’s primarily motivated by the story you might want to keep that in mind.

You can see everything this quest has to offer over at the Hall of Beorn.

After my analysis of the new cards from the box, it’s pretty clear that I’m going to have to give a Dale deck a try.

The two new Heroes, Bard son of Brand and Brand son of Bain are an obvious place to start. But who should I pick as my third Hero?

A Spirit Hero would give me the option to reliably play the vital King of Dale Attachment on round 1 if I should happen to draw it, which would be a good choice. But if I don’t draw it, I’m out of luck. Instead, I’ll use Beravor to ensure that I draw it early with the knowledge that I may have to wait until turn 2 for my engine to get up and running.

Once I’ve taken 3x of each of the Wilds of Rhovanion cards (except Necklace of Girion, of which I will take only 2x because it is Unique) I have to decide which Core Set cards to add to the deck to get me to 50. This turns out to be easier said than done, since there are only 15 card slots remaining, and I can choose from amongst three different spheres.

It makes sense to start by looking at the Core Set’s Item Attachments, since Bard can help me get them into play no matter what their sphere. There are a handful of good weapons in the Core Set for helping to buff up Heroes for the combat phase, but ultimately my combat prowess comes from my Allies, so I think I’ll pass on most of those. Forest Snare could be an option, but it’s a little pricey and once I get going my Allies should be more than capable of handling combat without resorting to preventing it full-stop. Plus, since it attaches to Enemies instead of my characters, it doesn’t really fuel the Dale engine in any way. In the end, the only Item I really want from the Core Set is Celebrían’s Stone; it has a good cost-to-willpower ratio and my Heroes will mostly be questing anyway.

Beyond that, I just grabbed some of my favorite Core Set staples, like Henamarth Riversong, Snowbourn Scout, and A Test of Will, to fill in the rest of the deck. There are a lot of other great Core Set cards that could be just as effective, but I chose whichever cards struck my fancy as I looked through the binder. 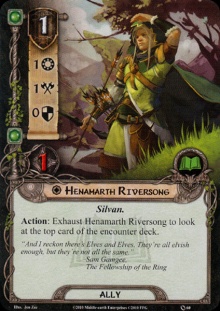 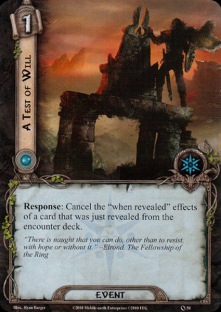 Notably, I actually passed on Steward of Gondor this time around. Partially this was because I wanted to see if I could build a strong deck without it, but in practice I found that between the cost reduction from King of Dale and the occasional burst of resources from Traffic from Dale, Steward just felt like overkill. 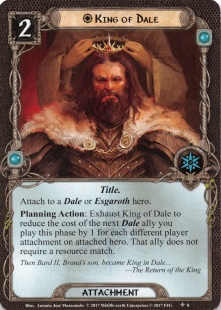 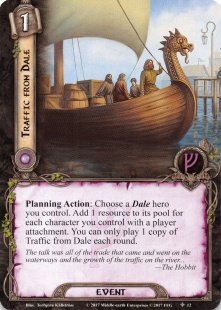 It’s rare that I have to make tough decisions about which cards to keep versus cut in a deck built from such a limited card pool, but with so many good cards coming from The Wilds of Rhovanion I actually found it difficult to pair the deck down to just 50 cards. It’s nice to have options! 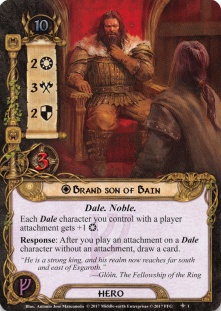 This deck on RingsDB

Equipping the deck for success

This minimum purchase Dale deck does a great job at showing off the new player cards!

As a Dale deck, the #1 most important card is King of Dale, so I mulligan away any hand that doesn’t have it. If I still don’t have it, I keep triggering Beravor‘s draw ability (if I can find any way to spare her stats) until I do find it.

If I’m lucky, I might be able to use a 1-cost Attachment like Map of Rhovanion in conjunction with Bartering or any Attachment with Traffic from Dale to afford King of Dale on round 1. Otherwise, I save my first resource on Bard so that I can be sure I’ll be able to play it on round 2. Usually I’ll crown Bard as King, since he’s most likely to be questing every round and therefore more likely to accumulate some extra Attachments, but it would be fine to play it on Brand as well. Once King of Dale has entered play, though, I’m off to the races. 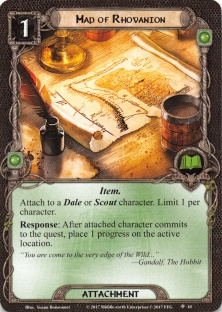 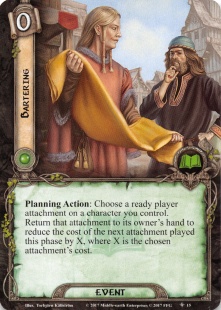 From there, I start playing as many Dale Allies as I can afford, equipping each one with an Attachment. I try to make ideal Ally / Attachment pairings whenever possible, but in the beginning of the game it’s more important to get those cards down and doing work than it is to get them perfect the first time. If I survive to the late game, I can always use a Long Lake Trader to swap things around and make my board state more efficient. 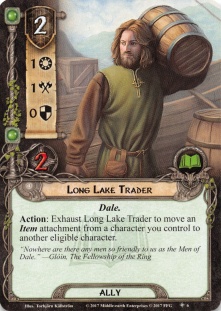 One of the things I have to watch for is the proper time to play Necklace of Girion. It’s a resource generation card, so it’s going to do me more good in the beginning of the game than the end of the game—but I’m also less likely to be able to handle another Enemy or Location from the Guarded keyword in the beginning when I’m still getting set up. Ideally, I could use Henamarth Riversong to tell me when it’s safe to play down the Necklace (bonus points if the top of the deck has Surge, since the Necklace won’t trigger it) but there’s only one copy of Mx. Riversong in the deck so I’ll usually just risk playing the Necklace at a time when the Staging Area seems pretty empty and hope for the best. 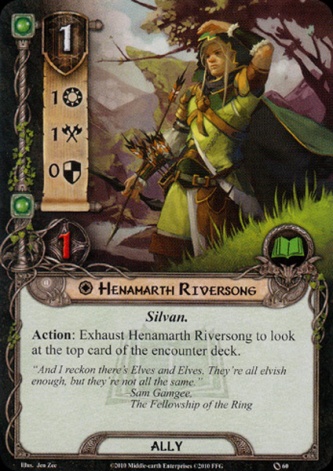 Between Beravor, Brand, and Gléowine, this deck has a lot of card draw. So much that I usually find that I’ve drawn through the entire deck before the end of the game. To combat this, I included a single copy of Will of the West so I can shuffle all of those Events and Gandalfs back into my deck (along with any early chump blockers or cards lost to Treachery effects). To be honest, it’s probably not necessary for me to do so—after all, once I’ve gone through the whole deck I probably have enough of a board state to carry me through. But at least shuffling the discard pile keeps things interesting as I close things out. 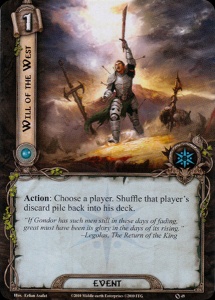 It can take a couple of rounds for things to get going, but once the Dale ship is sailing it becomes an unstoppable force!

The play’s the thing

In both games, the encounter deck played some nasty combos against me—a rather rare occurrence in solo play, where fewer reveals means that combos rarely have a chance to build up. But by playing carefully I was able to break the hold of those combos and pull out a victory. My winning game went on for a very long time; perhaps a bit longer than I would have liked.

Journey Up the Anduin is a pretty dynamic quest, and as long as you’re familiar with the Rules Reference Guide entry for the word “Then” the mechanics are pretty straightforward, without relying on any complicated gimmicks. While it’s not one of my favorite quests, it’s certainly fun enough to bring out from time to time. I like it better than any of the three quests from the Core Set, for sure. As an added bonus, the new Dale cards seem plenty up to the challenges that it presents.

That’s a pretty good start for Wilds of Rhovanion. But how will the rest of the box fare? We’ll find out whenever I take my next steps along the Path Less Traveled to become Lost in Mirkwood!

“Home is behind, the world ahead,
And there are many paths to tread.”

Next on Darkling Door…

I haven’t had as much time for blog writing lately as I used to. I barely have had a chance to catch my bearings and now it seems that GenCon is already upon me!

Next time I’ll talk a little about my GenCon experiences with The Wizard’s Quest and anything else fun that happens there. After that, I’ll be back to The Wilds of Rhovanion trying to see what else these new player cards are capable of!

3 thoughts on “Path Less Traveled: Journey Up The Anduin”

This site uses Akismet to reduce spam. Learn how your comment data is processed.