I’ve been having a lot of fun with the newest quests and player cards, so it seems like the perfect time to continue my Path Less Traveled series deep into the mountains of the Ered Mithrin cycle. Today, I’m going to venture into The Withered Heath, the first Adventure Pack, as it builds upon the story started in The Wilds of Rhovanion.

This is the first time I’ve covered an Adventure Pack in this series, which carries its own set of unique challenges. Unlike a Deluxe Expansion, Adventure Packs aren’t standalone—each one depends upon a particular Deluxe in order to complete the encounter deck. As such, my card pool for this post will consist of The Withered Heath, The Wilds of Rhovanion, and the Core Set.

Furthermore, since each Adventure Pack only contains a single quest, I’m not really going to get the opportunity to try out all (or even most) of the new player cards in any given pack—they simply won’t fit all in the same deck. This makes me hesitant to call out individual packs as “recommended” or “not recommended” purchases, since I won’t be getting enough experience with any given pack to really know its ins and outs.

Instead, I’m going to look at the cycle as a whole rather than try to parcel out which specific Adventure Packs are “worth buying” versus not. My primary question for this part of the series will be: Is the Ered Mithrin cycle fun if played as the first contiguous cycle after the Core Set? This means I’ll be using the player cards from each pack cumulatively rather than evaluating each pack as a single independent entity. That gives me a little space to try out different deck types and get a feel for the whole card pool before I make too many judgements about any given product.

So then, I’ve got my cold-weather gear all packed up, and I’m ready to begin the hunt for adventure! But before we take our first steps into the wilderness, let’s talk about the new player cards that will be accompanying me on my journey.

Beorn to be wild

The new Hero is Grimbeorn the Old, son of Beorn from the Hobbit books. He caused a fairly large splash in the LotR LCG community when he was first revealed, due to his ability to defend for 3 and then attack back immediately for what is effectively 5 at the cost of a single resource. He’s the perfect defender for mid-tier Enemies, often taking care of them all by himself. Unlike other Heroes who often need a Weapon or two to get the ball rolling, Grimbeorn is ready to go right out-of-the-box.

In addition to this beefy Hero, this pack contains a couple of cards that build towards a Beorning deck. Beorn’s Rage is an Event that subtracts 2 defense and attack from Enemies attacking or being attacked by Beornings. The defense debuff is less useful for Grimbeorn since he already subtracts defense from Enemies (and you can only go as low as zero) but the attack debuff can be great to help keep him alive against sturdier Enemies. The second Beorning card in the pack is Beorning Skin-changer, a 2-cost Ally who can be discarded to put a much more expensive Beorning Ally (like Core Set Beorn) into play. 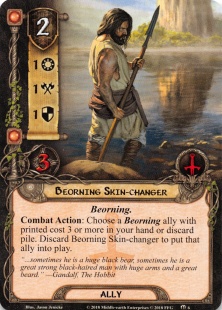 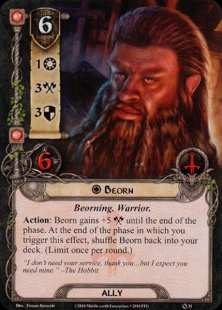 Honestly, though, with only 1 copy of Beorn in the Core Set, there just aren’t enough Beorning cards in this small card pool to make anything other than the Hero terribly useful here. These cards are probably going to sit in the binder unless you invest in some other packs (such as Over Hill and Under Hill or The Crossings of Poros).

Fortunately, there’s a lot more in the box than just Beorning support.

Just for the Dale of it

Two Dale Allies make their debut in this pack. The Guardian of Esgaroth can play the main role in a Dale deck all on their own, getting +1 to every stat for every Attachment they collect (up to +3). A fully-buffed Guardian can serve just about any role you want them to. The Long Lake Fisherman, on the other hand, searches the top 5 cards of your deck for any one card as long as you can guess its cost. This is great for whenever you want a specific card but haven’t managed to find it yet, and could be super useful in any kind of deck—not just Dale.

Of course, Dale is nothing without Attachments for its Allies. Fortunately, The Withered Heath has us covered. Squire’s Helm can go on any Ally, granting them +2 hit points, boosting their vitality enough to ensure they don’t fold to a wayward Treachery or Shadow Effect. The Grey Cloak is a little more niche, going on any Scout or Spirit character and allowing them to exhaust to prevent an Enemy from engaging you. 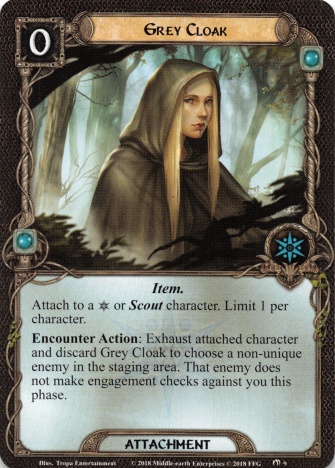 Neither Attachment is going to set the world on fire, but they’re both good additions to the Dale deck, providing cheap ways to trigger all of those Attachment-related boosts.

A little taste of what’s to come

The Withered Heath also includes a few cards clearly pointed at an archetype that won’t really be developed until the next pack: the Woodman deck, which get bonuses for playing Attachments on Locations. Fortunately, these cards can be pretty useful outside of a dedicated Woodman deck, too.

Woodmen’s Clearing attaches to a Location and reduces the first player’s threat by 3 when that Location is explored—a great effect that’s easy to trigger for zero-cost in Lore. As cheap threat reduction, I imagine this card will see a lot of play in different kinds of decks. If you are more likely to be able to handle a Location than something else that might come off of the encounter deck, you can use The Hidden Way to ensure that that’s exactly what you’ll get. At 2 Lore resources, it can be a little pricey, but sometimes it could be well worth it to buy yourself an extra round of relative peace when you’re still trying to get set up.

The final card in the box, The Arkenstone, follows up on the new Guarded player card mechanic. It brings either an Enemy or Location into play, but once you clear that obstacle it grants a +1 willpower bonus to all of your Unique characters. I’m curious if all of these Guarded player cards are also going to be a boon for the new Woodman archetype—but I suppose we won’t know until it develops more. 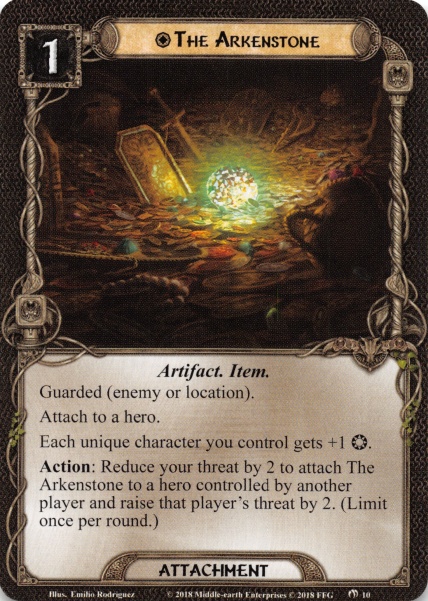 From a minimum-purchase standpoint, The Withered Heath is a bit of a mixed bag when it comes to player cards. The Hero is great all by himself, but the retinue of Beorning-focused cards are going to fall a little flat without some additional financial investment. Dale gets a fair amount of development here, and fortunately most of the cards that make Dale better can be used in other kinds of decks too. And there’s a little bit of preparation for the new Woodman archetype that we’re all hoping to see come online soon—but these cards can make themselves useful in the meantime as well.

In all, I’d say that the good general purpose cards (Grimbeorn the Old, Long Lake Fisherman, and Woodmen’s Clearing) make the pack well worth the purchase.

But the player cards are only half the story. How does the quest play?

What we’re up against

As always, I’m going to do my best to avoid story spoilers. If you’re the sort of person who also wants to avoid spoiling the quest mechanics, you can skip over the collapsed sections of this post.

You can see everything the quest has to offer over at the Hall of Beorn.

When I’m playing a Deluxe box for this series, I usually build 3 slightly different decks, allowing me to spotlight the various player cards in different ways. Unfortunately, I’m not going to be able to do the same thing here. Instead, I’m going to have to pick only a handful of the player cards to use. Maybe I can try the others out later in the cycle.

I don’t think I want to lay down any hard-and-fast rules for myself about which cards from each Advanture Pack I will use and which ones I’ll leave behind, but I think most of the time I’m going to want to try to use the new Hero. In this case, that means Grimbeorn. Unfortunately I don’t think I have enough Beorning cards to make good use of the Beorning Skin-changer, but at least I can throw in a few speculative copies of Beorn’s Rage to help Grimbeorn out of a pinch. 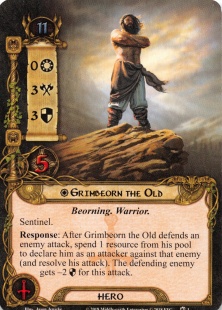 I can use a lot of the other cards from this pack if I build a Dale deck. That lets me bring in the two new Dale Allies and the two new Ally-focused Attachments, which can be pretty easily folded into the archetypal base laid out by The Wilds of Rhovanion.

That actually fills the deck up almost all the way to 50, so all I have to do is make a little room for some Core Set staples (Gandalf for card draw, Feint to help deal with early game Enemies, and A Test of Will for emergency Treachery cancellation). The deck almost builds itself! 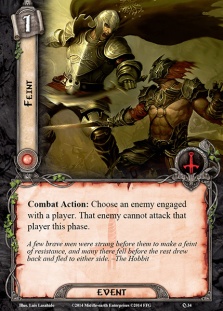 Here’s what the finished product looks like. Notice how few Core Set cards are actually needed to make it work:

For info how to pilot the deck, check out its RingsDB description.

The play’s the thing

My winning game went on a little longer than I might have liked, but the encounter deck did manage to slowly wear down my early control over the board leading to a tense finish. Grimbeorn was super helpful in the early game, allowing me to defend and kill small Enemies with only a single Hero action. I definitely would have liked a little more card draw, because my deck stalled out towards the end. The win was solid, although I don’t know how many more rounds I could have survived!

This quest takes a little longer to play than I would like, but it’s still an interesting challenge. It’s definitely beatable with player cards from just the Core Set, The Wilds of Rhovanion, and The Withered Heath, but it does sport a host of difficult challenges that can cause a good run to turn bad quickly.

The new player cards are useful and powerful, and—while there are a few duds for a limited card pool—most of them would prove versatile and useful in many different deck types.

In all, The Withered Heath is a good start to the Ered Mithrin cycle. But I’ve got a long way to go before I can rest my weary head—Roam Across Rhovanion beckons me onward!

“Home is behind, the world ahead,
And there are many paths to tread.”

This site uses Akismet to reduce spam. Learn how your comment data is processed.